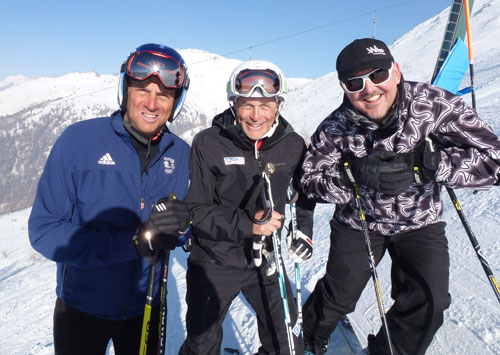 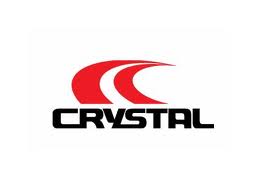 What a fantastic time in Sestriere last week with Crystal,  Sir Steve Redgrave, Ben Hunt Davies and a great bunch of skiers!

The ski fest week has been going for several years now and it is getting better each year! BASI became involved after Sir Steve Redgrave attended a level one BASI courses with me in Andorra a few years ago.  We thought that the Ski Fest would be an ideal opportunity for a showcase of British ski teachers and so BASI became involved. 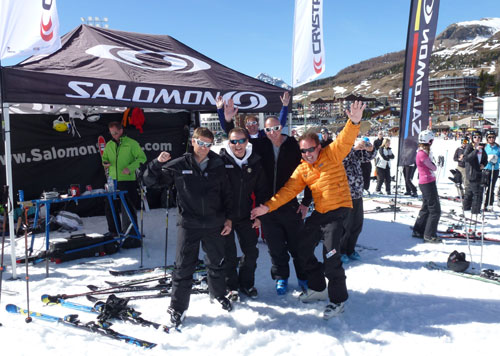 Sir Steve is, as you can imagine, a very competitive racer! Committed to getting the best from his skiing, he is definitely not slow!

The week is aimed at all level of skier and encourages skiers to give ski racing a go. From a simple dual slalom course, a speed piste to a timed GS there was plenty for the group to ‘have a go at’. 5 representatives from BASI were present, Gareth Roberts, John Gardiner, Any Jeram, Steve Ricketts, (Recently published his fantastic novel, Exodus, Lords of destiny!) and myself, Alex Leaf!  To ensure the racing episodes were of the highest standard Lynn Sharp, I.S.T.D. and Jo Ryding both superb race coaches were there to set the courses and provide expert advice for getting the best performance through the gates.  The whole set up in Sestriere for providing race pistes and ensuring safety was paramount by the Sestriere piste patrol. They were exceptional. Sir Steve and Ben seen here just about to start their dual slalom, boating attire on a mountain? (wrong sport boys!) 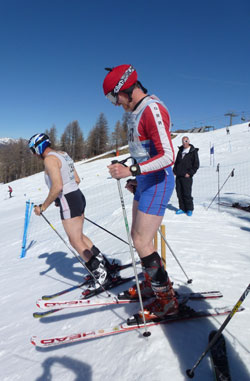 Crystal holiday’s product director, Ian Davis ensured that the whole week went without a glitch along with Sarah Mcghee Gemma Brown and Giuseppe, Thanks guys.  They did, of course, ensure that the socialising during the day carried on each evening…well into the early hours! 😉 .should I thank you for that?!

To add an extra ‘buzz’ and a great service, Salomon GB was there with next year’s skis to test. Kev, the representative from Salomon ensured everyone tried them out.  Kevin was very proud of his new tool……;-) an amazing portable ski edge sharpening device! Quite some tool Kev! …………………………………….£2500 worth! Many thanks Kev for your support. 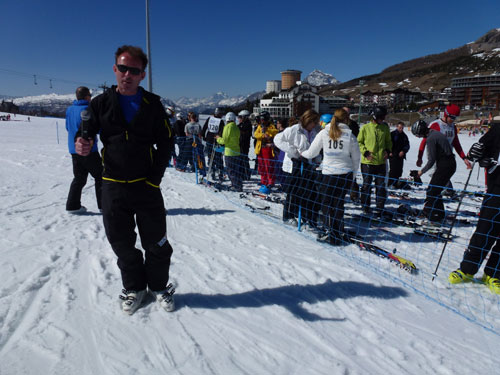 DSUK were also present they are supported by Crystal Ski.  DSUK provide all you need for adaptive skiing, from specialist equipment to highly qualified adaptive ski teachers. Rachel Easton and Fiona Young provided the expertise along with all their instructors for many people attending with disabilities. One evening was dedicated to DSUK for fund raising and to kick start the fund raising, each BASI trainer donated £200 to the fund, totalling £1000! Gareth in his ‘auctioneers mode’ set the scene and requested that if the trainers were prepared to dig deep, then can the collected crowd match the amount…they did,  almost 3 times over! The evening was a great success with almost £4000 being donated for DSUK!

Lastly, a big thank you to my two great groups, you are the ones which make these holidays memorable…see you next year! 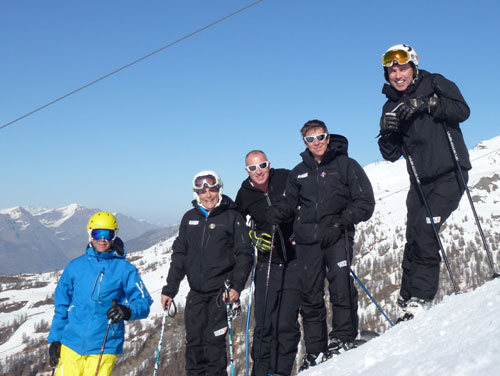 What a great week, flash tools, high profile Olympians, great skis, great people and some fantastic skiing….can we top it next year? I’m sure we can! 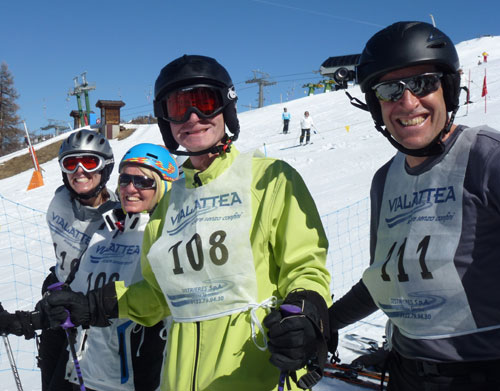