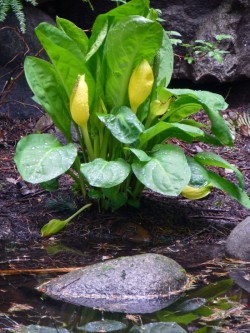 The lower area of Whistler and Blackcomb mountain is littered with the plant. Especially on the golf course. So you might ask, what’s the deal with this bright, colourful and smelly named plant?…Well, its the staple diet of the local bears.  Just the ticket for improving bowel movements if you’ve been asleep for 6 months!

I have been trying to get in a position, a safe one, to take a picture of one of the bears but alas they are not playing ball. So a picture of a skunk cabbage is the best I can do at the moment. Trudging through skunk cabbages and bear poo is not on my agenda right now…a BASI course is.. 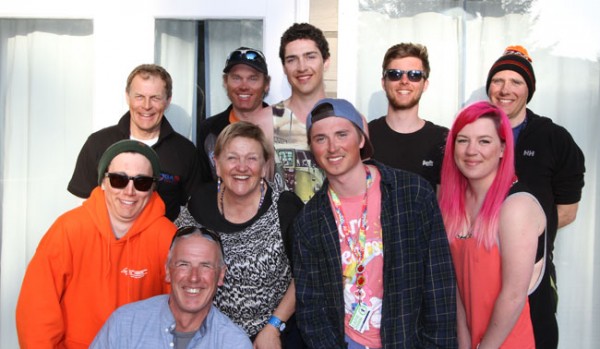 I am here running a BASI level 2 in association with ‘Yes Improvement’s owned by P.J. O’Heany.  I have been made most welcome here and P.J. has ensured that my stay has been the best it can be. Many thanks P.J.!

Staying at the Alta Vista Chalet, seen here, staffed by Silkie, from Devon! it has been great with some great food cooked by Silkie,  many thanks!.. The Chalet offers very comfortable accommodation, cosy and warm. Ideally situated close to the local bus service up and down the main highway to both Creekside and Whistler main village. 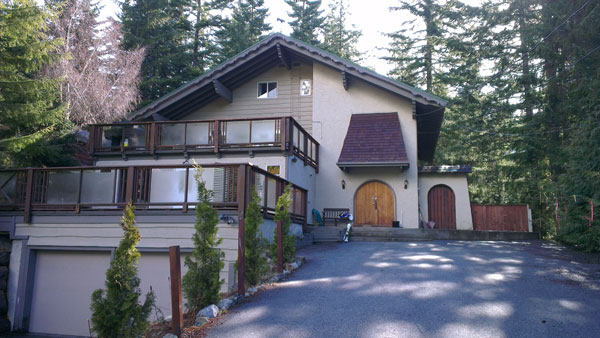 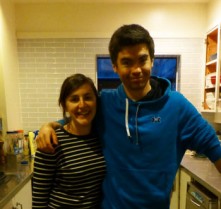 Silkie & George.  George works with the Whistler snow school and has had a busy winter teaching and now about to tackle the CSIA level 3, good luck George!

‘YES IMPROVEMENT’  is based in Whistler but also have programmes and courses running in many different countries around the world. A tour programme for like minded skiers.  The course programme here is for students to undertake the Canadian levels one and two but also leave the extended programme with a BASI level two also. It is great to be working alongside YES and the CSIA. The first week I had the pleasure of skiing with Meesh, he and I worked together learning about the two Instructor qualifications and the overlap of delivery. Its all very similar but just slightly different wording we decided! 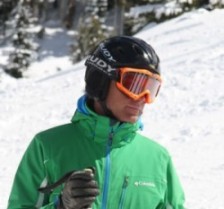 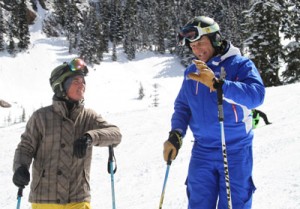 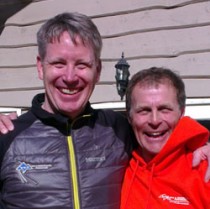 This is the very first BASI course run in Canada and it looks to be the first of many! The reception on the mountain has been just great, many instructors and other skiers approaching  me to enquire about BASI and some who have been here for years from the UK  and mentioning that they are old BASI members!  We need to be here BASI, so lets make it happen again in the future. 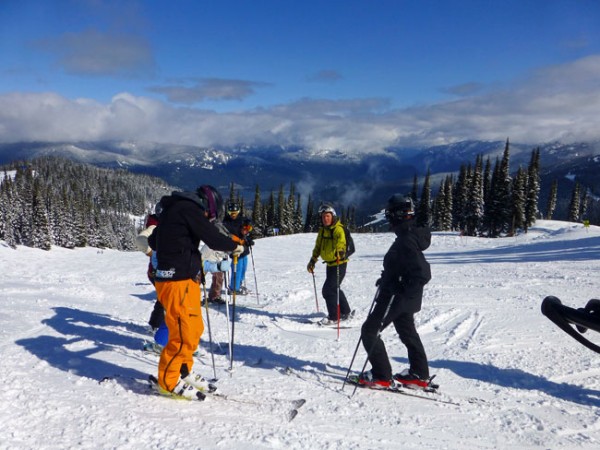 Working with your BASI qualification in Canada.

One of the group, Mark, has a very interesting story to tell……

‘I first did my BASI level 1 course at Breahead and used the qualification to teach at the centre. After several years and various positions I decided to come out to Canada, On arrival at Whistler I made it known that I held a BASI level 1…next thing I’m teaching children and working in the ski school!.  After some time at this I ended up working as a patroler and now am one of the main full time patrolers on the mountain. From blasting avalanches in danger zones to rescuing injured skiers/boarders on the hill. Its so rewarding. I now am planning on using my Level 2 to work even more with the ski school in the future. I love living and working in Canada and especially Whistler. BASI was the catalyst in helping me achieve this’. 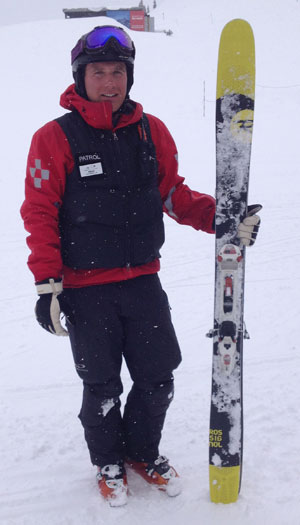 Mark has made it his career…

Who says you can not get a job with a BASI level 1 or 2?!  ‘There’s  more than just France out there you know!

By chance, Dave, a friend from the UK who lives just a few miles from me, was here on Holiday. Dave is also on the BASI ladder and joined us for a day to shadow the session. Great to ski with you Dave. 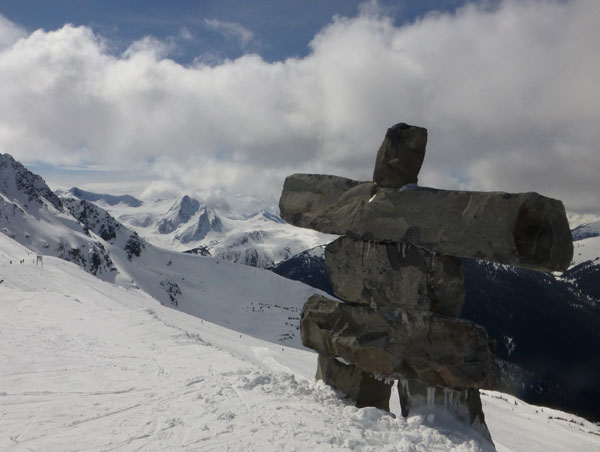 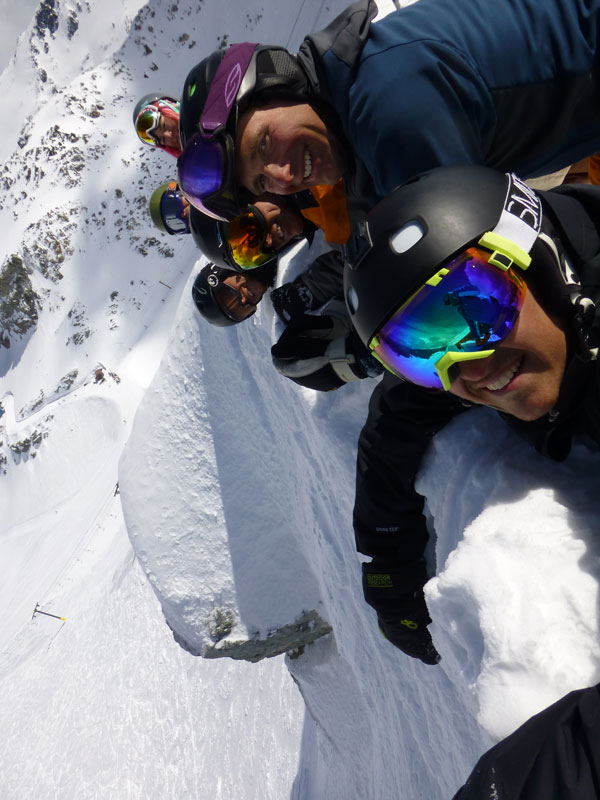 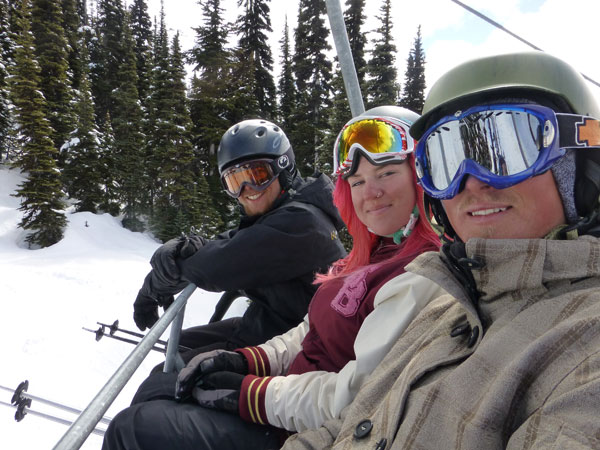 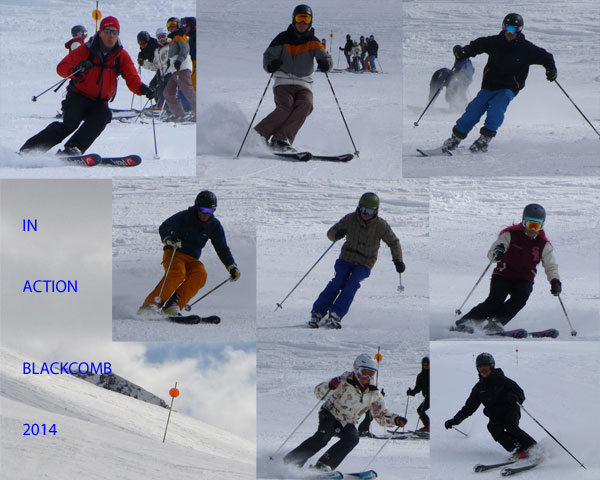 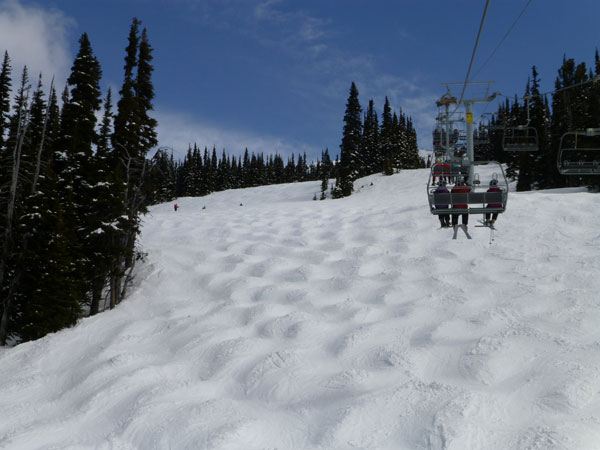 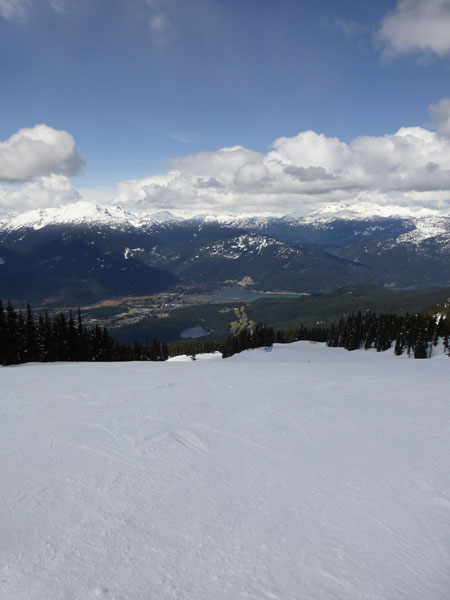 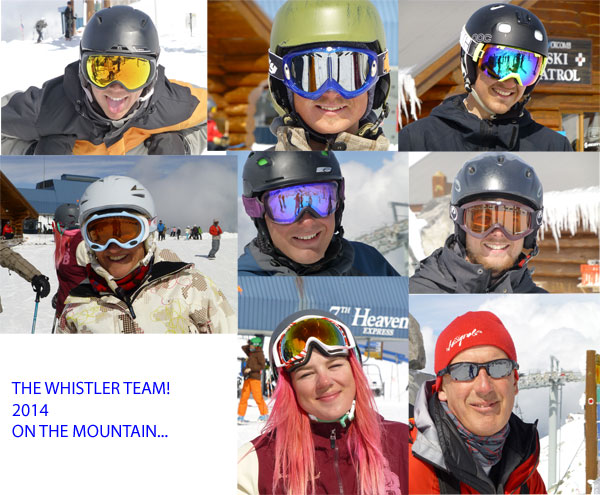 What an amazing place….BC…especially Whistler/Blackcomb…however, its the people that make it..!

Having the bonus of the 2 free days mid course meant that I was in a position to get around the area. I decided to shoot off to Vancouver for the weekend. Travel here is easy with regular bus services to and from the city. 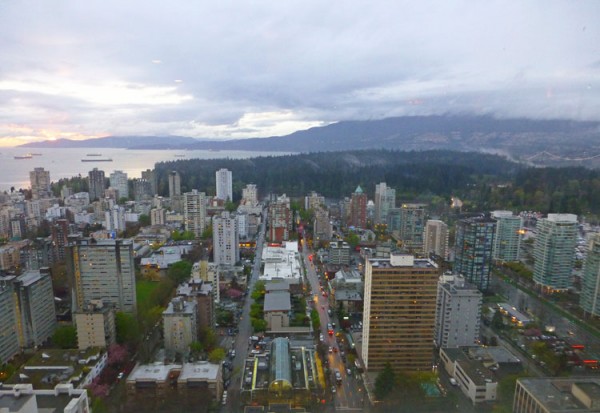 A day and a half in Vancouver is just not long enough to witness the exciting area. I managed to get across to Lonsdale Quay, and a quick wander around downtown to get a feel for the city. Having looked up several hotels I decided on the Landmark hotel, I was unaware when I booked that it has the best view of the city from its revolving restaurant on the 42nd floor! Fab! It was just fantastic. 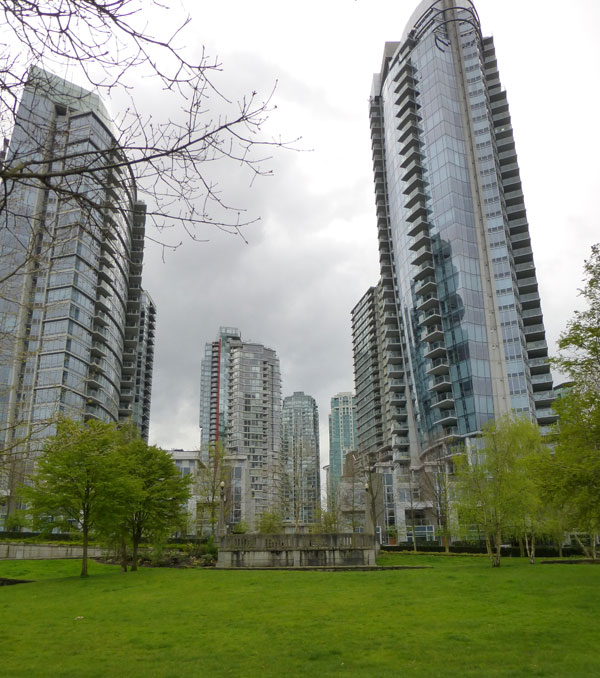 After checking with the visitor centre on the water front, the reception I got from the guides there was superb, just great service. I mentioned that I only had so many hours there so what should I do? My itinerary was quickly arranged for the Sunday, taking in Capilano suspension bridge and the Aquarium to see the Beluga whales. This is situated on Stanley Park a beautiful area of the city. You can hire bikes to tour around, I sadly did not have time to do this..next time I hope. 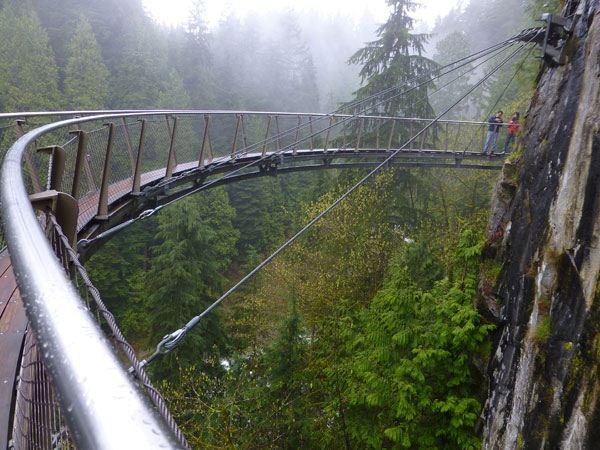 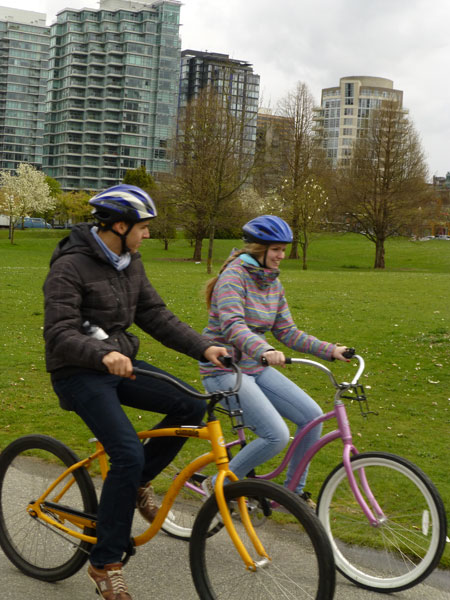 An odd thing happened, on the Sunday morning..my cousin (whom I have NEVER met, only had an address, no email nor phone) lives in N Vancouver, I opened  google maps on my phone, to my amazement I find that his house is only 1.4 miles from where I was standing.  Do I hire a cab and go? or just walk away? I hired a cab…nervously……asked the cabbie to hang on for a few minutes…I knocked at the front door…several times…no one in, disappointed I get back in the cab…. Never mind I thought, the meeting will just will have to wait till next time, as I’m coming back to Vancouver BC! 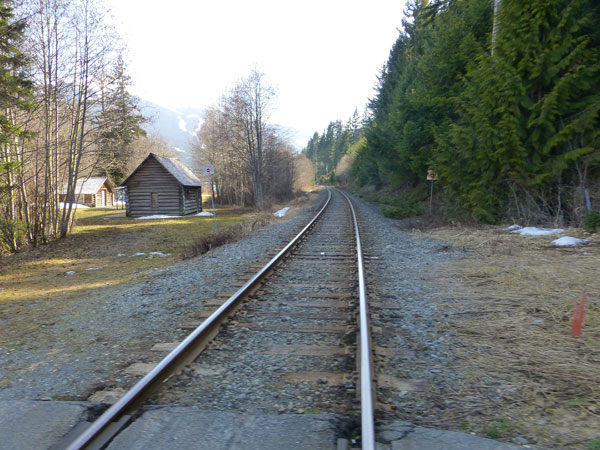 What’s skiing done for me??….well, its given me travel, to see the world, fantastic days on the mountains, the thrill of moving around on snow and above all….. to meet new friends and be with some great happy people…..

Ho! and I nearly forgot….I did see some bears…munching dinner on the golf course.. 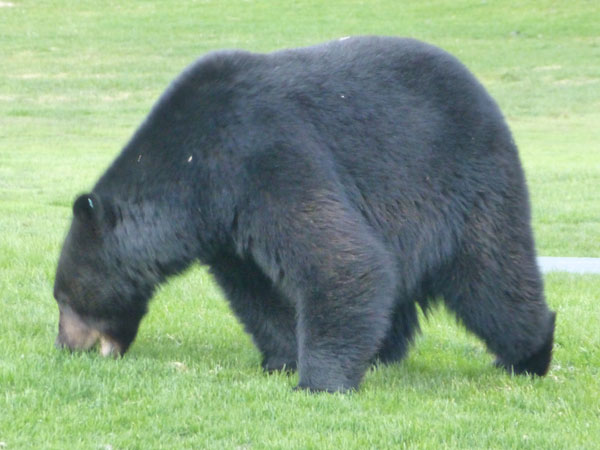