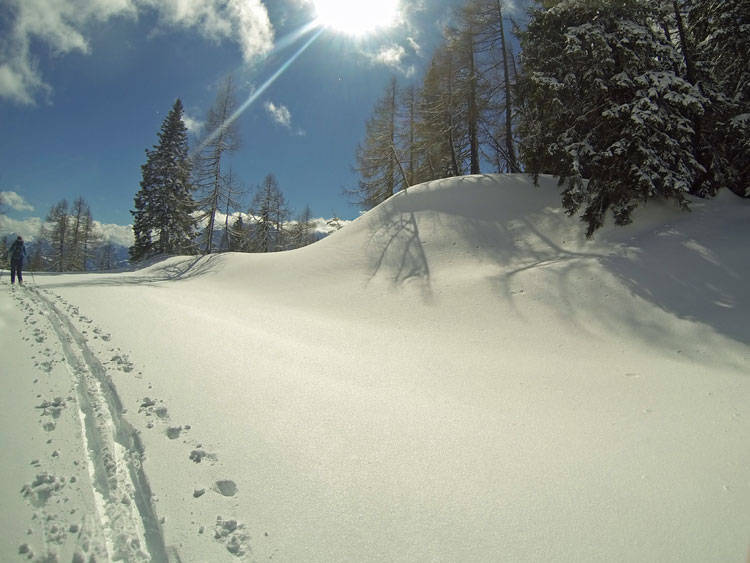 Now, I am Mr Safety, Mr ‘What if’? Wear a life jacket, Don’t drive with bald tyres…wrap up warm etc etc.

4 years ago today I had a bit of a spill. 11.40 am.  A ride which was rather disturbing. You could say the ride of my life. But then, that’s probably a bit dramatic.

My first real venture after 45 years of skiing….in an Avalanche. For sure I’ve been on a few, slipped down a few minor chutes but never been tangled up in one until this one.

To the bystander it may have looked rather tame, but to me, in it, it certainly didn’t feel tame at all.

It was a sunny day, a day off from Training and Assessing ski teachers in Switzerland for my Association. My colleagues and I went for a leisurely ski to enjoy the fantastic fall of snow on a crisp, cold sunny morning. One of those days that you just knew that sleeping in was stupid.

Off we ventured up the hill to the slope which, apparently, never slips..(I should have listened to my inner voice..!) The open area was almost full of other skiers all stating their claim on their bit of virgin snow. Billowing powder went everywhere and the area looked fabulous.

Our first run went well and stoked with the feeling of freedom, my buddies said, ‘another..run?’ I wanted a coffee, but thought I should join them in that ‘just one more run’

As we entered into the pitch, I mentioned to my skiing buddy..’This Snow is moving strangely and feels rather odd’ ‘Yes it is and does, I thought that too’ she said.

After several majestic arcs and powder up to the chest…my ski pre released, or maybe it was just my bad skiing..and ‘BINGO’! I’m now face down and frantically digging myself out. Me shouting, its OK, I’m fine I’ll just find my ski. After realizing I needed to trudge through the deep powder up the slope to find my lost ski I took  the other one off and walked up the slope a few meters.

Making the ‘cross hatch’ search I soon felt and heard the ‘clonk’ as it came across the ski, I turned and shouted, ITS OK, I’VE FOUND IT!  At that point I did’nt quite understand why my friend was screaming loudly..ALEX! ALEX! ALEX! LOOK UP! LOOK UP! she said..I did, and a load of expletives passed my lips…I was already almost up to my chest in the snow and to see what looked like the same amount in height coming towards me I figured that a wave of snow trundling down was a bit like the surf near our local beaches..I thought, naively that diving into it will bring me out the other side of it just like a surf wave…It did’nt.

The snow kept coming, pushing me, trundling me in a washing machine, pushing me down the slope. Yes for sure, you get these thoughts going through your  head, Is this really it? My Wife, Son, Family, the dog? why did I think of the dog?! Then as quick as those thoughts came into my head the thoughts of, ‘I’m wearing our associations uniform, My transceiver was in the bedroom not on me….(I wasn’t planning on going off piste that day!) And this was not good news if ‘this was it..’curtains’.!

Tumbling through the debris and sort of trying to swim, I emerged, who knows how, on the top as the avalanche slowly came to a stop about 100 mtrs above my buddies.

They were, and I’m sure would agree, rather stunned and some, upset at the situation. One said I wasn’t sure what I was going to have to say to your wife! (You would have done a great Job I’m sure’D’).

After standing up, and at that moment, terrified the rest of the slope may go and take us with it, I recall shouting,’ITS OK, I’M FINE! (Inside I’m thinking I’ve got to get out of here) I then proceeded to walk through the deep powder to the gang, its almost impossible when the snow is well over waist height..to walk that 100 mtrs seemed to take ages, maybe 15-20 minutes? who knows. It went on and on. Eventually arriving with my buddies, safe, but rather ‘shaken’ At that moment a frantic Swiss skier arrived, panicking, and with no real calm rescue behavior, got his transceiver and shovel out and started frantically trying to search the debris…It would have been futile, he was too stressed to handle it. We told him that there was no one else in it, just me and I’m OK.

This served as a real eye opener that in any disaster, stress should be channeled into a calming behavior, take stock, look at the situation and then proceed to take action. Its a bit like what we teach in First Aid, Stop, Call for help, Check for Danger, then check response etc..its a default mechanism, you can then start to work out what to do. Just panicking is useless.

Eventually 3 helicopters arrived to search the area and rescue a snowboarder over the other side (nothing to do with he Avalanche) . Followed by two piste security guys and their dogs.. This was not good news for me. Trying desperately hard to not reveal my name for fear of the dreaded ‘FACEBOOK’ Idiot social media scandal I started to set off with one ski from my fiend to get to safety. It was too late, the helicopter winch man and doctor said ‘we can take you back’ here, clip in. I thought that the ride beneath the helicopter at 1000 ft would be rather exciting so I agreed.

Landing at the safe point I quickly un clipped and said thank you only to be told, you must come to hospital…you can suffer secondary drowning from inhalation of snow crystals..Drat.. they got me I thought!. Insurance card at the  ready off we went.’ Bugger, I thought, I’ve been rumbled. Ho, a word on Insurance, It took them almost a year to pay up..the 14000 swiss franks for the ‘rescue’ Lets face it, they had to find someone to pay for it..its Switzerland after all.

After several hours in Sion Hospital I was released…Luckily no names were put out to the press from that incident..phew, However, that was the same day that 14 others were killed in Switzerland in avalanches, so sad. I was the very lucky one.

I monitored the press for several weeks afterwards and I got off Scott free! Until now. But then, its old news, BREXIT, TRUMP, NIGEL FARAGE AND BORIS have taken over the top place.

All I know is this,  Always remember, your fate is in your hands, don’t do something your not sure about, and if that snow moves strangely……

go and have a coffee.